I realised that this blog has not had any posts recently, so I thought I’d write something.

PubhD is still going strong, and is still spreading to other cities.

At Nottingham we’re fully booked to July 2016. July 2016! We can’t give concrete dates for events beyond that as we have to wait for the football fixtures to be announced in June 2016 (we don’t like to hold an event on the same day as a football match as the pub gets very busy pre-match and makes it difficult to prepare the room ahead of our event). Any speakers that want to speak in August 2016 and beyond can still contact us to leave their details and we’ll get back in touch when we have firm dates.

PubhD Nottingham – we have an average attendance of about 40. Standing room only when 60 people attend!

PubhD Leicester have their 11th event next month and is booked up into 2016. They’re full to February 2016 and have just booked a speaker for May 2016. Get in touch if you want to speak in Leicester.

Recent additions to the PubhD family include Manchester, Dublin and Brighton. Contact details can be found on this page if you’d like to attend or speak.

PubhD speakers only have access to a whiteboard – no Powerpoints allowed! (Image from PubhD Brighton)

And we’ve finally broken out of the British Isles. PubhD Lisboa now exists! 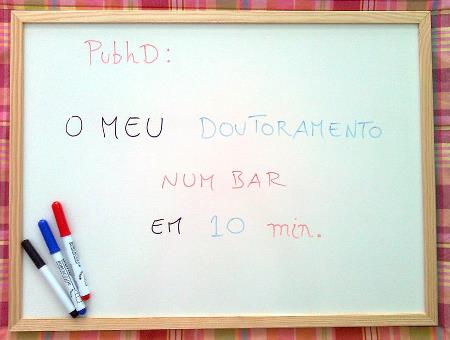 They had their first event last week and the organiser, Sérgio Pereira, said:

The first PubhD Lisbon was a success! More than 20 people came to the event and engaged in a lively conversation. The speakers just loved it.

Want a PubhD in your city? They are easy to set up, speakers love speaking at them, and the audience loves hearing about the research happening on their doorstep. Get in touch – we can answer your questions, provide some tips and advice and and hopefully help you get going.