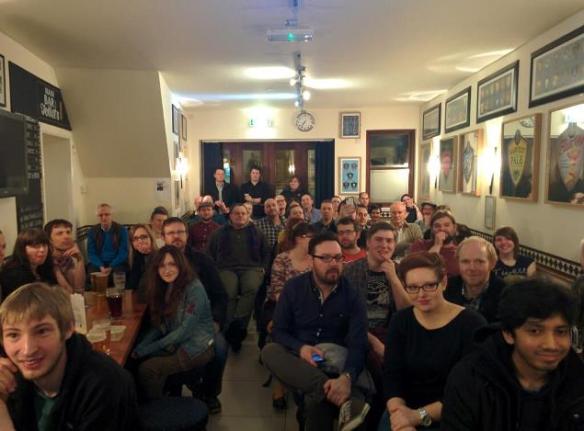 Like Christmas, the run up and organising of PubhD was almost as much fun as the event itself. Tweets had been tweeted, Facebook events updated, 3 PhD student speakers invited and the pub room booked.

Finally the night of 22 January 2014 arrived for us to have the first ever PubhD: three PhD students, in diverse academic areas, would tell a bunch of people in a pub about their research. We just had to provide them with beer.

At a virtual sell-out for the room we were delighted to see so many new faces as well as some regulars from Nottingham Skeptics. The numbers were swelled by some lovely members of Lincoln Skeptics in the Pub, who made us deeply jealous with the marvellous logo that their burgeoning PubhD (Lincoln) group had produced: 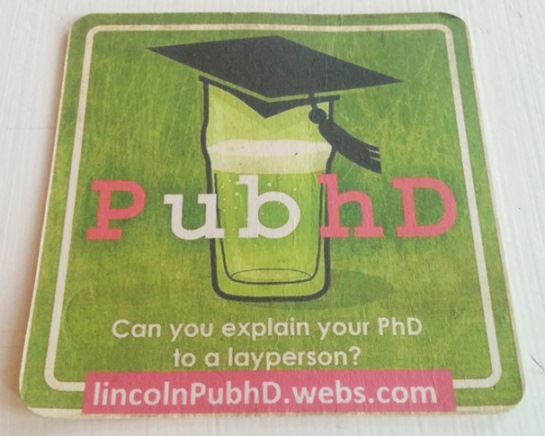 To keep things simple, alphabetical order based on academic area provided us with our running order.

First up was Sera Baker, a doctoral researcher in Archaeology at The University of Nottingham. She spoke to us about studying the small shops of Roman Pompeii before they were destroyed by the AD 79 volcanic eruption of Vesuvius.

Sera started by busting some common misconceptions about Pompeii, which included the fact that it wasn’t a fabulously rich city but rather ordinary, and that during the eruption at least half of the 12000 residents escaped.

Sera’s obvious enthusiasm for Pompeii was tempered by the surprising news that heritage contracts seem to be run by…erm…shadier members of the local community should we say. This can make research and preservation of the site difficult. She had to sadly report that the site is falling apart and, unlike nearby Herculaneum, there isn’t funding to maintain it. The Q&A demonstrated the popularity of Roman history and Sera’s humour (she doesn’t have any bits of Pompeii stuffed away at home…yeah Sera…we believe you 😉 ) made sure the subject stayed very human. As a Canadian, Sera had the misfortune of not being familiar with the seminal work of Frankie Howard on the subject.

The next speaker was Dave Farmer, who is a physics PhD student at the University of Nottingham. He spends his time studying the elastic properties of polymer films. He does this by hitting them with a stick and watching them wobble.  What made his talk interesting was that he actually uses powerful lasers on films 1000 times smaller than a human hair.

Dave’s style incorporated humour and half intentioned smut to put his ideas across. It’s surprising how easy it is to make alleged grown-ups giggle with the word wobble. Our portable instant whiteboard was put to good use with some good old fashioned diagrams, and despite Dave’s best efforts to destroy it, it worked well. How making something wobble can tell you interesting things about it was practically demonstrated by Dave playing the National Anthem on a musical ruler. Yes, really.

The Q&A clarified that not every-one who has a massive laser is a Bond villain, but he does sometimes refer to his laser as a Death Laser.

The final speaker of the night was Christian Perrin from Nottingham Trent University – he works in forensic psychology and his talk described the issues surrounding peer support groups in prisons and their effect on re-offending. Christian passionately described how meaningful activity while in prison can improve prisoner’s outlook on life and themselves. He was also clearly disappointed that the data that would help him measure the positive outcomes he was hoping to find was so difficult to obtain. This was further illustrated during his Q&A where Christian spoke about how dealing with humans with privacy concerns means that Psychology may not as scientifically rigorous as some may like, but its results are significant none-the-less. Most interestingly for us was the story about the bizarre paradox that The Samaritans will run mentoring with a prisoner to improve their self respect, but if that individual were to volunteer with them upon release, they would be turned down following a CRB check. It would seem meaningful options for prisoners following released are incredibly limited.

After the event, we chatted with all three speakers for the Pod Delusion podcast. All speakers thoroughly enjoyed their experience, and got something out of it too (and not just the free beer!). Christian pointed out that hearing people in other disciplines present their research had given him ideas about how to explain his own research in the future. The interview can he found on Pod Delusion episode 221.

Judging by the spontaneous and lengthy applause after each speaker, we think everyone present thought the night was a success. However, we’re looking for feedback – what can we improve? Let us know in our “Request For Feedback” blog post.

2 thoughts on “A review of the first ever PubhD”